ENTERPRISE NEWS FROM PORTSMOUTH AND HUDDERSFIELD 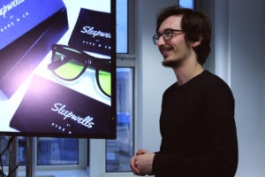 University of Portsmouth: Investing in Startups of the future

Students and graduates were put through their paces during the nest startup funding pitches in January.

Having secured seed funding from Santander Universities and HEIF, nest set out to find the startups of the future. Applicants had the opportunity to apply for up to £750 if they were at the idea stage and up to £3,000 if they were ready to scale up. 21 startups were selected out of the staggering 77 applications received to pitch in front of a ‘Dragon’s Den’ style panel. The quality of the pitches was extremely high. Ideas ranged from a bespoke lingerie company to aquaponics, a video production company to wearable tech, online retailers to a cosmetic tattooist. See the full news story here.

Innovative business ideas from cutting-edge areas such as cyber-security, artificial intelligence and virtual reality were paraded before His Royal Highness The Duke of York when the latest edition of his Pitch@Palace was staged at the University of Huddersfield. The University of Huddersfield’s Director of Research and Enterprise, Professor Liz Towns-Andrews, spoke about the role of universities in the digital transformation of UK business, and said that the latest Pitch@Palace theme was aligned to the Government’s Industrial Strategy and its series of Grand Challenges. She described how the University of Huddersfield had several research centres that specialised in the relevant fields and gave examples of breakthroughs in areas such as artificial intelligence. Read the full story here.