ENTERPRISE NEWS FROM SUNDERLAND AND KINGS 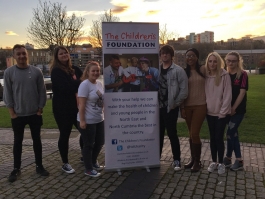 University of Sunderland students have risen to the business challenge, taking £25 and turning it into thousands of pounds for a local charity, using their entrepreneurial skills.

Thirty-three teams in the first year of their studies at the Faculty of Business, Law and Tourism took up the Take 25 Challenge. Sponsored by intu Eldon Square. Each team was given £25 to use to raise as much money as possible in just a month. The teams raised an amazing total of £5,597.77 for The Children’s Foundation. The North East charity raises money and runs projects that directly benefit children and young people in the region. Read the full story here.

Kings: An entrepreneurial year including a win at National Awards

Kings College London have produced a fantastic round up of their Entrepreneurship Institute’s year that included a win at the National Enterprise Educator Awards. The year started with a hop onto the Venture Bus for the UK’s first ‘Venture Crawl’. During the year they met lots of inspiring people including Professor Bill Aulet of MIT and they spread their wings internationally visiting innovation hubs around the world including Dubai, Japan, Dhaka, Hong Kong and Lisbon. At the core of their activity was support for their King’s20 ventures with one cohort graduating and a new one starting in October and already winning investment. Read the full summary of the year here.