How to succeed at failing 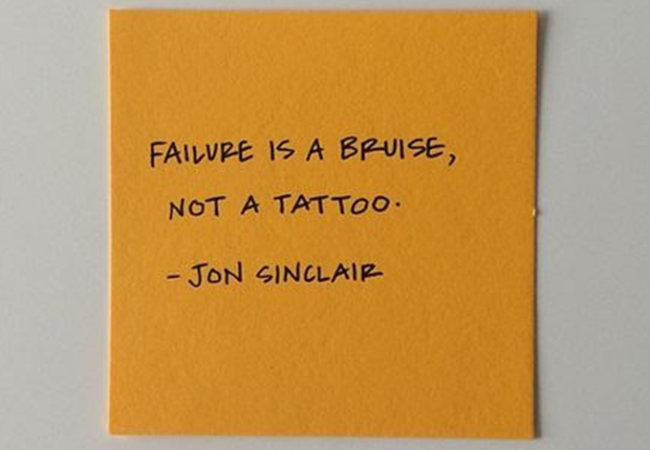 The academic team from the Centre for Innovation and Entrepreneurship (CFIE) ran an interactive seminar at the International Enterprise Educators Conference (IEEC) annual conference in Oxford in September 2019. The subject was central to our core mission of enabling innovative and entrepreneurial students; how to handle the inevitable failures that arise from the process of trying to do something innovative. This seminar went on to win the ‘Best in Track’ award for the ‘Enterprise within the curriculum’ track, which shows how much interest there is in this topic.

Failure plays a pivotal role in the literature of both innovation and entrepreneurship; from the necessary failures of any experimental method that probes new territory, through embracing ‘fast failure’ in Eric Ries’ Lean Startup methodology, to the notion of expert entrepreneurs undertaking ‘affordable losses’ in the effectual logic of Saras Sarasvathy; failure is everywhere, but it doesn’t mean seeking catastrophe, it means learning through small setbacks along the path towards discovering insights and creating value.

In our interactive seminar we had over 20 colleagues from across the UK and beyond engaged in sharing their examples of failures they’ve witnessed or suffered themselves in the classroom. We used these examples and the discussion that followed to address three questions and identify some useful principles for other educators.

How do you enable ideas to fail but students to succeed?

Recognising that students can learn a lot through making mistakes we often try to cultivate a learning environment within which students can fail without being academically penalised.

In the CFIE we use a lot of student project work; often group-based, in which the development of an idea is central. Whilst this project may carry a lot of weight we try to mitigate the risks to the students by marking their process or method rather than the idea; we also often include an element of reflection as a means for students to potentially have a car-crash of a project but still demonstrate how much they have learnt from the process.

Similarly, IEEC participants also championed the use of both ‘rewarding the process not the outcome’ and ‘using reflection’ as the best means of marking the learning rather than the idea itself. Breaking the assessment down into discrete ‘chunks’ whereby each element might stand alone in the mark scheme rather than one poor element sabotaging the rest was also suggested, as were ‘offering multiple attempts’ and ‘providing very clear examples’. We really liked the suggestion to ‘set an impossible task’ whereby the outcome was doomed to fail but the process of undertaking it might still be usefully marked, and similarly to ‘work on someone else’s idea’ which again reduced the implications of the idea itself and focussed attention on the process used.

How do you handle situations where students fail at the process of what is being taught?

Sometimes students will fail to demonstrate or execute on the process or method that is being taught in a class despite our best efforts. Sometimes they will even chance upon a decent final output that as an educator you know is derived from a poor or inaccurate method. How do you deal with a failure to learn?

Here in the CFIE we have had incidents where one or more students has not adopted the taught process and persisted in simply writing up an early concept despite all the evidence suggesting they iterate or pivot away from it, often in denial that their pet project has no traction with its intended audience.

This might be a failure on the part of the educator to get the method across, so we tend to use a mix of staff feedback, peer review, and iterative steps to catch a bad idea before it gets too far. IEEC participants also heavily recommended the use of ‘checkpoints or viewpoints’ on a regular basis, and processes of ‘external and peer review’ as another means of catching bad ideas and reinforcing the adoption of a good process. Those reviewers might be other students (in the class or beyond it), mentors, external advisors, or guest speakers who reinforce the process taught.

Opportunities to ‘hire or fire’ group members and similarly mechanisms that ‘reward or punish non-engagement in the group or the class’ were suggested as a means of making sure that individuals were participating, so hopefully picking up on all the cues to adopt the process! ‘Being clear about expectations’ was heavily recommended and again ‘multiple or iterative attempts’ might be a means of catching a poor process at an early stage.

Given that as educators we need room to innovate and be enterprising in our classrooms; how do we deal with the inevitable risk of failure as an educator?

The CFIE is still something of a start-up itself; we are only this year, 3 years after opening, teaching all four years of the new units written for our programmes. Inevitably not all the bright ideas we have for a unit work at the first attempt; so how do we manage at the front of a classroom when our ideas fail any or all of the stakeholders concerned? For example, this year we adopted not one, but four new assessment formats for a single 40-credit unit… Whilst one was a huge success and the others were all broadly effective, the combined effect on the students and staff did create some uncertainty and anxiety that would have been gratefully avoided by all concerned.

IEEC participants highlighted, above all other suggestions, the value of a ‘supportive culture’ in the department to undertake innovative approaches and manage the fall-out when they don’t quite work. This includes senior and peer encouragement (not just tolerance) and ‘license to experiment’.

Linked to this was strong endorsement for ‘having time to evaluate’; so, colleagues can plan well, anticipate and respond to problems, and prepare examples and explanations to support students through new and unfamiliar processes; ‘modelling what success looks like’. Using ‘incremental adoption’ was also recommended, as was ‘sourcing and responding to feedback’. Time and tolerance are required on the part of colleagues, students, and from the educators themselves to not rush too far ahead too soon.

IEEC participants particularly championed the importance of focusing assessment on reflection and marking the process rather than the outcome and highlighted that the hardest thing to get right was finding the time as a staff member to do all these things to an effective standard. Getting the culture right to support failure as integral to learning was both championed as critical and acknowledged as hard to do.

The seminar at IEEC was a great opportunity to share practice, gather up some great ideas, and validate a lot of our current approach. Thanks to the CFIE team: Ki Cater, Suzanne Cole, Sam Crawley, Dave Jarman, Andy Littledale, and Mark Neild. Thanks also to all those who took part and shared some of their hard-won experience!