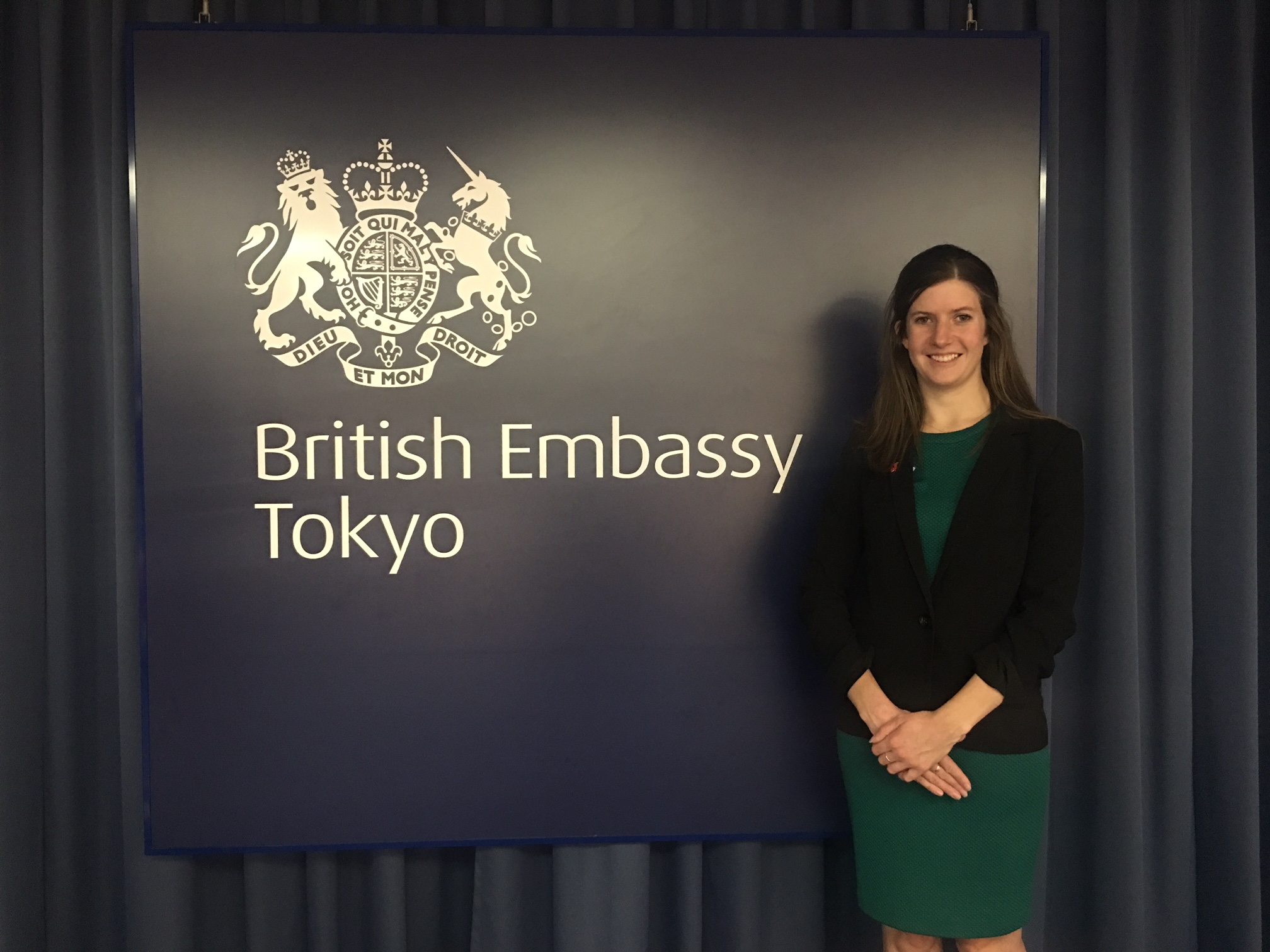 The bullet train, laptops, the calculator – just some of the world-changing innovations to come out of Japan, not to mention karaoke, Pokemon, ramen and the robotics Professor who created a robot clone of himself. So I was excited to join a delegation to Japan earlier this month to find out more about how they support young entrepreneurs.

So what did I take away?

The main way entrepreneurship is embedded in Japanese higher education is through the EDGE (Enhancing Development of Global Entrepreneur) programme. 5 EDGE university consortiums lead the programme, funded by the Ministry of Education, Culture, Sports, Science and Technology (MEXT).

Strikingly until 2017 the programme only supported graduate students, and it is only now that the potential of undergraduates is being realised. Many of the programmes were also very much extra-curricular, at NAIST held on Saturdays outside of core hours, and in one example based physically outside of the university campus.

One thing that both the UK and Japan struggle with is how to support research staff and get the buy-in of PhD supervisors and course providers. An encouraging example was Osaka University who had a strong focus on co-creation and a series of innovative cocreated PhDs programmes, similarities drawn to Wales’s KESS, a pan-Wales initiative where research projects are cocreated with industry.

The potential for entrepreneurship within the school curriculum and capturing the entrepreneurial spirit young was discussed as an area with big potential. Again Wales was highlighted as a country where this has been very successful.

Incubator and accelerator programmes have sprung up across UK universities, offering community spaces for students and staff to try our new ideas, prototype products and collaborate with others. Japan hasn’t seen such a sharp rise.

One of the incubators we did see was Waseda University’s Incubation Promotion Office. Waseda is one of Japan’s top private universities yet they still struggle to get the numbers of entrepreneurial students they’re looking for.

The University of Tokyo has had startup success with over 200+ startups created with value exceeding 1 trillion yen. However their ecosystem is still comparatively small and behind other countries and Japan is low on scores of Total Early stage Entrepreneurial Activity (TEA).

Complications around Intellectual Property were discussed as a potential contributor. It was also noted that tech transfer is under-resourced in Japan and insight could be gained from Innovate UK and the UK’s Catalysts.

There were lots of interesting initiatives happening in Osaka. The City Council run an innovation lab in a local shopping centre where shoppers become beta testers and try out new products. Hackathons, including one joint with UCL, have been a big success, developing companies like Moff who went on to raise £80,000 on Kickstarter.

The city is also using its open space to trial research, creating outdoor labs to test running shoes, running fab labs and finding ways to bring the city onto the campus. Osaka is big on ‘Technovation’, Osaka Prefecture University runs a vast artificially-lit plant factory growing food for student and staff lunches on campus and Osaka University is home to incredible robots, AI and Smart technology including the lab of Hiroshi Ishiguro, the Robotics Professor who build a robot clone of himself.

The region suffers however from startups (including Moff) moving to Toyko and trying to keep talent in the region is a problem despite the brilliant Bullet train reducing the travel time between Tokyo and Osaka to a couple of hours. This echoed the London effect in the UK and ideas were exchanged about regional funding and development.

Running activities in close collaboration with students was seen as key to both the UK and Japan. Students at Osaka Prefecture University had been supported to launch a satellite into space (!) and lead hackathons. At NAIST we were treated to a presentation from one of their students who gave brilliant insight into his motivations, experience and learning from the entrepreneur programme and hopes for the future. At NAIST students were also encouraged to self-identify as the innovator, fundraiser or marketer to aid team and startup building.

The UK and Japan both share the huge challenges of ageing populations, air pollution in cities, and economic instability, and it was refreshing to see real-world problems, social impact and making the world a better place at the heart of many of Japan’s entrepreneurial programmes including interesting research collaborations in Cambodia and New Mexico.

Students were encouraged to have an entrepreneurial mindset from day one and it was impressive how closely many of the Japanese university activities mirrored their strategies and visions. A lesson that could be learned by many in the UK.

Both the UK and Japan aim to create entrepreneurial mindsets. Part of this is fostering leadership and communication skills, confidence and resilience. Several Japanese programmes included exchange visits with the US including San Diago and Silicon Valley to encourage often reserved Japanese students to step outside their comfort zone and gain new soft skills.

International students were also identified as more entrepreneurial than other students, moving to another country and integrating into a new society involving many of the skills useful to an entrepreneur.

Practical ways to tap into this talent included increasing the number of foreign language courses, new exchange programmes and making it easier to obtain visas, including categories like the Graduate Entrepreneur Visa.

7.Diversity is still a problem

While celebrating diversity was an aim for many of the programmes, highlighted in NAIST’s Global Entrepreneurs in the Internet of Things for instance, many programmes still had a lot more men taking part than women. Increasing the diversity of people involved in entrepreneurship is a challenge and NAIST are taking positive steps to work with women’s groups and to diversify out of STEM and partner with arts universities. Many in the UK also identified diversity as an ongoing challenge.

Several of the Japanese stakeholders mentioned a lack of entrepreneurial role models in Japan and that students and young researchers are often discouraged from starting a business by their parents, something echoed by Mistletoe founder, Taizo Son in the FT.

How to involve family members and break down the barriers to entrepreneurship is an interesting area for exploration for both countries. One suggestion was to harness university alumni as positive role models.

With the upcoming 2020 Olympic Games in Tokyo, the UK suggested learning from the UK’s experience of the legacy of the games, and the opportunity of using sport to engage new audiences and break down barriers. Lancaster University are doing particularly interesting things around sport, opening a new campus in Manchester with the 1992 Manchester United football team, UA92.

Both the UK and Japan shared frustrations about changing government ministers and a lack of long-term thinking and funding.

The UK are looking to formalise their entrepreneurial reporting methods and structures and identify how best to demonstrate impact. The UK recommended EntreComp for a shared definition of entrepreneurship https://ec.europa.eu/jrc/en/publication/eur-scientific-and-technical-research-reports/entrecomp-entrepreneurship-competence-framework and the QAA guidance. They also highlighted the UK’s new combined Research Councils as a means to access funding rather than applying to individual funding bodies.

The need for a practical way to share learning across EDGE universities was highlighted and a model similar to EEUK was suggested. EEUK now have over 100 institutions as members and run regular events, an international conference and shared learning resources. EEUK have also recently launched their exciting plans to go global.

Communication and cross-collaboration within institutions was also raised as needing improvement and resource to support internal communication and infrastructure. Awards for entrepreneurship such as the UK’s National Enterprise Educator Awards were seen as a good way to celebrate and build an entrepreneurial community.

In summary Japan is an intriguing and awe-inspiring country and the visit was hugely worthwhile. The visit followed a successful visit to Japan from Professor Tim Dafforn, Chief Entrepreneurial Adviser at the Department for Business, Energy and Industrial Strategy (BEIS) in late September and there is much to build on.

It was encouraging to see such different countries as the UK and Japan share so many similarities and challenges in enterprise education and such scope for innovative and forward-thinking new collaborations. We look forward to exciting times ahead!